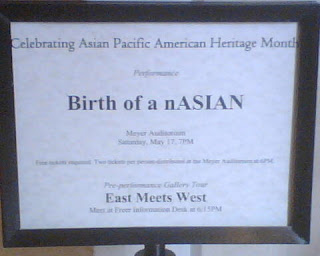 This was Slanty Eyed Mama's second year at the Smithsonian Institute's Meyer auditorium performing funky urban Amerasian pop to a sold out crowd who then lined up outside on the sidewalk where we May or May not have been selling t-shirts and cd's outside of the back of a red chevy rented from JFK airport for the trip. I'm just saying. We did the play Birth of a nASIAN written by me, the extremely talented playwright and my colleague from Juilliard (who that I work with isn't really) and with music by me and Lyris Hung.

So we performed a very bare bones but full length version of the play which you can see a clip from here which is the China Latina character talking about the bullshit of ticking the "other" box on her unemployment forms...this was actually taped at the comedy central theater where we did a redux version of the show last fall for about 35 minutes.

Soon I will blog some of the most common questions asked in q and a, but this was a very prestigious and super fun gig and I hope we keep going back...