I'm down on the left next to Paul Mooney.
Well I didn't exactly start a rice riot, but definitely landed a few zingers on Dr. Phil today and more importantly, felt like i was able to articulate some of the more salient points about the hidden bias against asian americans in this country which, among other things is manifest in the idea that we are all foreigners in our own country. I say OUR because we participate in pop, watch tv, are influenced by media, pay taxes, go to school, vote, consume and reble just like everyone else but for some reason, and I blame the media for this mostly, my very dysfunctional chosen family of taste makers and producers and performers, for some reason, we are all visitors and thus not accorded the same respect and welcome. And we are all chinese. This is me with all my Dr. Phil Swag after the show. Free is my favorite flavor. 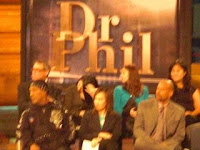 SEXY IS AS SEXY IS INTERPRETED
I have said this in my lectures at universities and in my act, but the MOST hurtful thing about this is not the sad whining boo hooo I can't sell a rap record, boooo hoooo why don't white people think i am sexy and give me an acting job (get over it all actors have suckass lives no matter the color and we all fight to be liked) naw. Our angst at being relegated to the pidgin speaking manicure giving delivery boy math nerd dragon lady suzie wong submissive gang member karate kickin opium smokin ching chongs is not academic and not a lame exercise in wanting to sit with the popular kids at the lunch table. It is a cultural handicap to an ENTIRE DIASPORA of people when the culture in which they throw their dollars and votes and faith a. treats them belligerently as clownish chinks and b. refuses to acknowledge or affirm its asian american heros and c. cock blocks the creation of asian american heros by continuing to push the stereotypes in our collective consciousness (the media) whilst refusing to LET US be seen as successful hot cool creative AMERICANS.

BE COOL.
Since my work with chink-o-rama (which i am considering re-mounting) this is the message. I'm not bitching about the stereotypes as much as I am lambasting EVERYONE for ignoring and shutting out the American Asians from feeling like they are welcome participants in their own culture. WHY? Because half of the students I interview at Universities around the country have suicide stories about CULTURAL CONFUSION. what the fuck is that??? how can an idea from books and sociology courses be causing kids to want to kill themselves. Honey if you have nothing to look forward to, eg. if you are deprived of images of success that look like you, and moreover are taunted with images of lampooned losers as your future in this country while rebelling against your parents/ancestors clinging to "old ways" there is nothing to fucking live for. I HOPE that all yall bad ass funky american asians are out there fighting alongside me for the best reward. To be cool. To be successful. To be heard. I loved going on Dr. Phil. i havent' reported from the fronts in a long time but I am out here every day trying to represent. And tell dirty jokes. But that's another story.