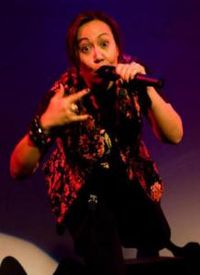 ‘Birth of a nAsian’’ is a smart, funny, and surprisingly endearing mix of musical parody and character-based comedy from the performing duo Slanty Eyed Mama. This fast-paced evening is so much more than a clever title, managing to slam stereotypes and point out the prejudices and culture clashes confronting Asian-Americans every day.

Staged last weekend as part of the Theater Offensive’s annual Out on the Edge Festival in the intimate cabaret setting of Dean Hall, upstairs at the Calderwood Pavilion, “Birth of a nAsian’’ effortlessly walked the line between theater and stand-up comedy.
At the heart of the show were the terrifically talented, Juilliard-trained performers: Lyris Hung, an electric violinist who could slip easily from John Mellencamp’s “Little Pink Houses’’ to an elegant and eloquent selection from Disney’s “We are Siamese,’’ and the incredibly high-energy writer, singer, and storyteller Kate Rigg. With her rapid-fire delivery, Rigg described growing up as a “rice cracker’’ in an ultra-white neighborhood in Canada, struggling with who and what she was supposed to be.

The evening alternated between songs with lyrics like “wish I liked to wear plaid, had a boyfriend named Chad’’ and stories about a 30-year-old auditioning to be a cheerleader, Asian students driven to succeed, an unemployed music school alum looking for words to inspire others, and a girl whose parents want to send her to finishing school even though she says she’s “never started anything.’’

Although Rigg and co-writer Leah Ryan’s imagery was vivid enough on its own, PowerPoint slides occasionally ran behind Rigg as she sang, and the contrast between the Asian performers onstage and the white role models depicted - the Brady Bunch, Morgan Fairchild, and Olivia Newton John - were starkly obvious.
Rigg delivered her stories at a breakneck pace, but her comic timing was so sharp that the audience stayed right with her. When the show culminated in a hilarious and sharply pointed rap, “Rice, Rice Baby,’’ in which Rigg skewered the stereotypes of Asians working at dry cleaners and nail salons, audience members laughed along even as we cringed. Slanty Eyed Mama’s Boston appearance was all too brief, but keep your eyes out for a return engagement, as this team’s outrageous political and racial humor is too good to be missed.