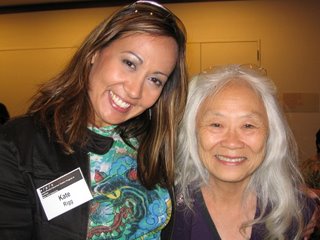 So between me and about 40 other people in a room in NYU's Kimmel Center, a day passed of discussions and panels on "The Woman Warrior at 30" which was the A/PI institute's tribute to Maxine Hong Kingston's groundbreaking book of 1976. And I was asked to come and speak as a writer and asian american thinker on how far (or not) we have come since the book posited a contemporary heroine shadowing the ancestral glory of Fa-Mulan. A friend gave me the book way back whennnn, and like all the other orientally things my friends sometimes seem compelled to present to me (fans, hello kitty trinkets, expensive and useless reproductions of shadow puppets, books on China etc) I relegated it to the "white people who are trying to connect with my ethnicity" pile of things to re-gift. I always smirk a little when some non asian friend decides it is a good idea to get me some kind of Yellow like me, I'm Ok you're ok, gift that: a) I have no use for (knick knacks mostly infuriate me--if it is made of porcelain or has no other function but to look pretty on a shelf fuckin dont buy it for me) or b) No one would think to buy me in a million years EXCEPT for the fact that i am asian american (witness my collection of buddhas using cellphone fridge magnets, hello kitty miniature beer can holders and panties that say stuff like everyone likes an asian girl. although i kinda liked that last thing.)
Anyhow, Woman Warrior was similarly presented to me by a pseudo friend who had no knowledge of me nor had bothered to ask beyond recognizing the dark skin and slanty eyes, so his "I thought you might like this" was greeted with the same look I give to people when we are at a movie in japanese with subtitles and I am asked to translate. From the japanese. My mistake.
Upon receiving the summons to speak at NYU I pulled that buried paperback out of my bookcase and began the literary journey back to through time with Ms. Kingston, back through her life on my way to better understanding my own, that is. It is a dense book. I have been reading screenplays and tabloids and business rags for the last 12 months and had to slow down bessy, to get into the book. I had to reread entire passages to unfurl tangled webs of poetry and emotion and personal history and confession. It literally took me 3 weeks to finish this book, me, someone who can scan a page in 30 seconds and quote from it. I read slowly, arduously and ultimately felt rich, and nourished at the end of said book.
Then I pretty much had one day to to formulate an intelligible presentation alongside major academics and writers who were also on these panels. People who have written books and don't spend their days yelling "eat the taco!" to bikini clad girls on rooftops in hollywood. (Which I enjoy immensely but is hardly relevant here.) I decided to go back into the archival material from the urban tao/americasiana projects I have been doing-- interviews on tape with 81 or so asian americans I conducted last year and ongoing. I wanted to pull out themes that resonated with Woman Warrior-- generational conflict, the problems of biculturalism, the lack of viable role models in Asian American culture, stereotypes and exoticisation of americans who happen to be asian, and the intersection of ancestral history with the desire to be successful in new ways in this new world.
My speech, apparently was pretty great. I read from my interview with the aptly named Hope who spent her entire high school career pretending to be puerto rican in an all white town. the next generation of assimilation had her choosing a 'cool" ethnicity as opposed to whitewashing herself. I read from Sonyk's call to arms through her air guitar victory in 2004 when she swept the international air guitar championships in finland in a naughty school girl skirt and hello kitty bloomers. I talked about the shocking number of girls I interviewed who had suicide stories centered around the experience of being pressured by asian parents to be GOOD, study like maniacs, stay out of 'white' life, stay away from other races, stay away from dating, fun, art, etc vs. the pressure at school to just fit in and be cool. I remember during these interviews thinking holy frickin geez why do all my sisters hve suicide stories?? what the hell? do i have one? ( My story friends is not one of ubercrisis and a suicide attempt but more of a constant dulling of the senses through distraction and snacking and despair but that is for another day.)
I realized that Maxine had written all this conflict and all this experience 30 years ago and it was reflected in the lives of girls searching for their voice, searching for their matrilineage, searching for a culture that included their fruit of their whole existence not just the sections consumed by various takers in their lives. I spent a good part of the day thanking Maxine HK out loud, and silently as I listened to all the other speakers talking about the doors she opened and continues to open in her work, now with veterans of war veterans of peace and her writing projects.
I bought two copies of Woman Warrior for her to sign-- one for me and one for someone I havent met yet but who I will know when I meet her.
And in mine she wrote just one word. Sister. To this only child it meant everything.